A story of hope 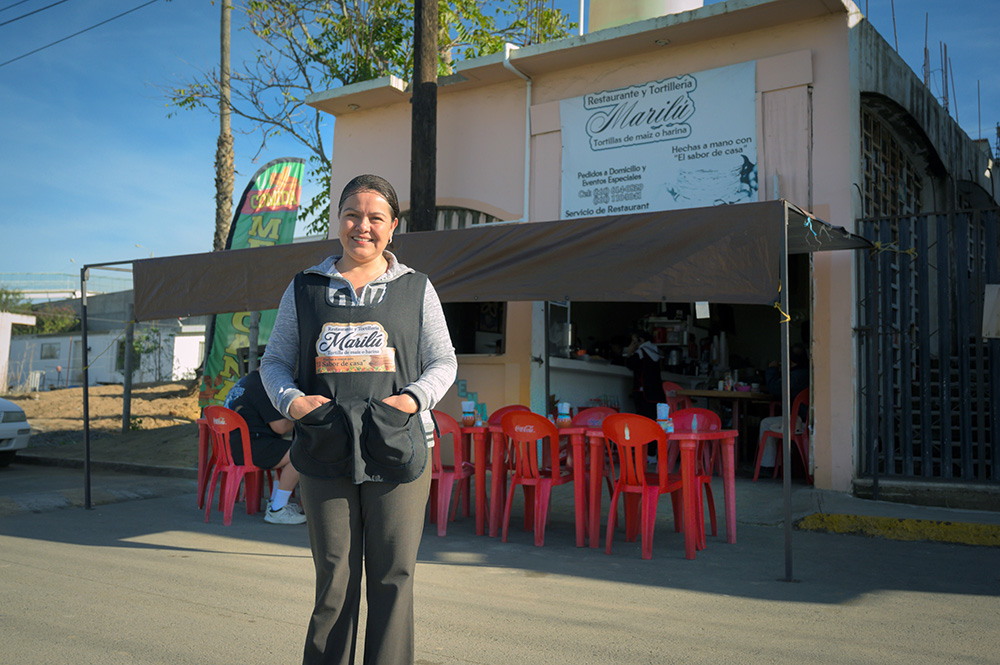 When Marilu arrived in Primo Tapia with her four children, she was in a very dangerous situation, fleeing an extremely violent and abusive man. She didn’t know anyone in Baja California, Mexico, but she came to hide in a small house that was being lent to her.

Marilu heard about Casa de Luz through her new employer. While talking with her, we quickly realized the gravity of her situation and began developing a plan to provide support and advocacy for her. With the generosity of sponsors, we were able to help her find a stable and healthy living situation. She then started a savings plan with us, which allowed her to buy a car that she used to deliver hand-made tortillas to local restaurants. In a matter of months, Marilu opened her own restaurant, which quickly expanded to include a tortilla business. Because of her hard work, positive attitude, and determination, her business has been growing consistently and she has been able to provide employment for 12 other women, including 6 CDL Moms.

“I feel like with the help of Casa de Luz, I was taken out of a life of slavery and brought to the promised land”

In 2014, Marilu was accepted into CDL’s Own Your Own Home Program. We witnessed her determination to make a better life for her and her children and we wanted to continue to encourage her in her journey. She moved into a beautifully constructed brand new home with indoor plumbing and electricity. It has been a tremendous gift to her family.

Currently Marilu has one daughter at CDL as her other children have graduated from the program. They are all doing extremely well. The changes we have seen in Marilu since she first came to Casa de Luz have been remarkable. She was visibly insecure, fearful, and shy. She is now hard working, confident and strong.

“Now I see my Mom so full of joy, energy, motivated, working hard to reach her goals and her dreams.”

Over time, she has been able to break free from the negative words her husband had spoken over her in the past, and with God’s help, she was even able to contact her ex-husband and seek and extend forgiveness. She is still healing from the tremendous amount of pain that was inflicted on her by all the physical and emotional abuse she suffered, but she tells us she is not afraid anymore because she is no longer alone. She has found God, and she has found a family in La Hermosa church and Casa de Luz.

“I honestly wasn’t looking for God, but I firmly believe that God truly was looking for me.”

Marilu continuously gives testimony to what God has done, telling people about His goodness and the miraculous difference He has made in her life. She also now co-leads a women’s group called Flourish at Casa de Luz, extending a hand of hope to other women who are walking through dark and difficult times.

In June 2019, after dating for four years, Marilu was married to Juan, a man she had met at La Hermosa Church. It has been a privilege to see the way that God has restored Marilu’s life in absolutely every area. From being a woman who was defeated, hopeless, and alone, God has restored her into a woman who is mentoring other women who are walking through similar situations, breaking the cycle of hopelessness by offering empowered employment to others, and living with fullness in every area of her life. This is what God’s complete restoration looks like.

“My heart grows so big when I see the new restaurant being built, and I know that my whole life will never be enough time for me to thank God for all that He has done in my life.”

Marilu is also embarking on a new adventure with her beloved restaurant, Marilu’s! Casa de Luz has invited Marilu to become a part of the Casa de Luz Team where she will be able to mentor even more women and offer more opportunities for employment. Casa de Luz will be partnering with Marilu, moving her restaurant to a brand new space in CDL Village and through this, shifting her role to Manager and Mentor instead of business owner. “I feel so much joy inside when I think of this project,” says Marilu. We feel the same joy along with her in thinking about how she will be able to use her story, the events of her past and her passion to focus her time on encouraging and discipling women with stories just like hers. It has been a dream of Marilu’s to be in ministry in this capacity and we’re thrilled to be able to make this a reality in her life.

“I hold onto God’s promise that says, ‘Call to me and I will answer you.’ I have seen God’s miracles in my life and I am so grateful to God that you have brought both me, and the mother’s working with me into this new season. May God bless you greatly.”